In a hurry? Scroll down to the important action section, “Protect Election Integrity After 2022.”

With early voting underway, it is urgent that you are aware of a serious problem potentially impacting delivery of your ballot to be counted.

Due to various economic and political situations, the US Post Office is experiencing staff shortages and increased delivery problems across the country. If you mail your ballot, it must arrive to be counted. The Postal service must perfectly execute their job as they used to, and evidence shows they are falling short when it counts, election mail delivery. 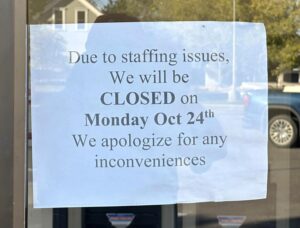 Knowing election mail is flowing soon and has to be delivered for mail voting to work, I asked around and listened to several folks at several meetings. I learned that at two small rural post offices in my area, sample ballots were sitting in the corner in boxes, late and not delivered. Our county election official’s office had to directly resend a massive amount of them to voters. A postal customer conveyed the story that they asked the local postmaster, they were told they were sitting in the corner in boxes and they’d get to them when able. They were a few weeks late already. This caused me great alarm.

Under most state laws, your ballot must arrive by a certain date and with a postmark by a certain date, at election offices, or it will not be counted, period. The only way around this would be if there were a significant problem discovered impacting delivery of numerous ballots. However, some voters or agency, etc. would have to file a lawsuit (and pay for it), and get a quick ruling to allow for those votes to arrive late and still be counted before the vote was certified.

During the Great Depression, gangsters would hijack the mail. The Postmaster General eventually asked President Harding to send in the Marines. Conveying the seriousness with which postal delivery was taken, Secretary of the Navy Edwin Denby wrote, “… mail must be delivered. Or there must be a Marine dead at the post of duty. There can be no compromise.”

While state legislatures were implementing draconian mail voting during the Covid pandemic, numerous elected officials proclaimed, without any evidence, that the Postal Service would always ensure perfect delivery of election mail and that would never be a concern of the mail voting movement. Election mail carries a special logo indicating it is official and is supposed receive priority handling. Recalling the ignored sample ballots in the corner, we know such was propaganda to push mail voting on The People irresponsibly.

The good news is we can and should do to turn this mess into a win for election integrity. If able, please turn in your mail ballot to an official drop box of your local election officials or other in-person methods set up to receive your ballot. If unable to deliver personally, and in states where it is legal, you can ask a ballot harvester to deliver your ballot, but be sure that they are someone you know or at least are an official representative of an organization you trust.

You should also learn how you can verify your ballot was delivered and ultimately counted. States have different procedures for confirming they received and then counted your ballot. Check with your election officials or secretary of state to identify your procedures. In some of the systems a ballot will not show as received and counted until some time after election results are announced, even up until the point where results are canvassed and certified per your state laws. Hold your election officials accountable for your ballot being counted but also be reasonable as to how long that might take and that each office is dealing with a few ten thousands to potentially a few million ballots being counted by that office.

We also can not only think about this election. In early 2023 most states will have their state legislative sessions. While many would like to get rid of universal mail balloting, chances are low in states that pushed it into law already. There are real chances though to make dramatic improvements. Here comes the part where all voters can and must play a role.

If you experience anything that seems odd, corrupt, illegal, not normal, or otherwise suspect during voting, immediately call it to the attention of election officials according to their rules. You must also make a brief memo with the date, time, location, names of officials you dealt with and names of others present that also observed any problems. Briefly record your interaction with the election officials. You must now also pass this information to an election integrity organization outside of your government officials.

As these 2023 legislative sessions come to order and state legislators put bills forward to clean up your state’s election process, one of two things will happen here: One, voters will not take these warnings seriously, not make reports, and the mail voting-loving legislators will ignore the bills and gaslight voters saying there are no problems and nothing will change. Or, number two, these bills will be put forward and legislators in state legislatures across the United States will be able to draw on huge piles of real, documented, factual accounts of real problems that must be fixed. The larger the record of real problems, the better the chances of making improvements in the system, to make it easier to vote and harder to cheat!

Please be sure to share the link to this page with all your friends and family. Post it to your various social media, etc. If we see something and say (report) something, make notes of something, and provide big piles of those notes of something, our elected officials must do something. Help more people learn they need to act now while early voting is already underway!