Where Are Illegal Aliens Crossing The Southern Border?

Border officials reported that most encounters with migrants illegally entering the U.S. occurred in Texas’ Rio Grande Valley, according to Customs and Border Protection data.

Local officials in McAllen, Texas, had to set up tents to hold COVID-19 positive migrants who were released from federal custody into the town, the Daily Caller News Foundation reported on Aug. 12. A leaked video showed hundreds of migrants crowded at a temporary tent compound set up to house migrants who tested positive for COVID-19 after they were released from federal custody.

“Right now if you look at Texas, for example, McAllen, that’s been the epicenter for quite some time, right,” former acting CBP Commissioner Mark Morgan told the DCNF. “One of the major reasons is, it’s not necessarily what’s happening on the U.S. side, although that’s part of it, it’s really Tamaulipas, [Mexico], a full-blown Narcos state. The cartels own that, the Governor of Mexico has lost control of that, they’ve got no influence, they’ve got no power.” 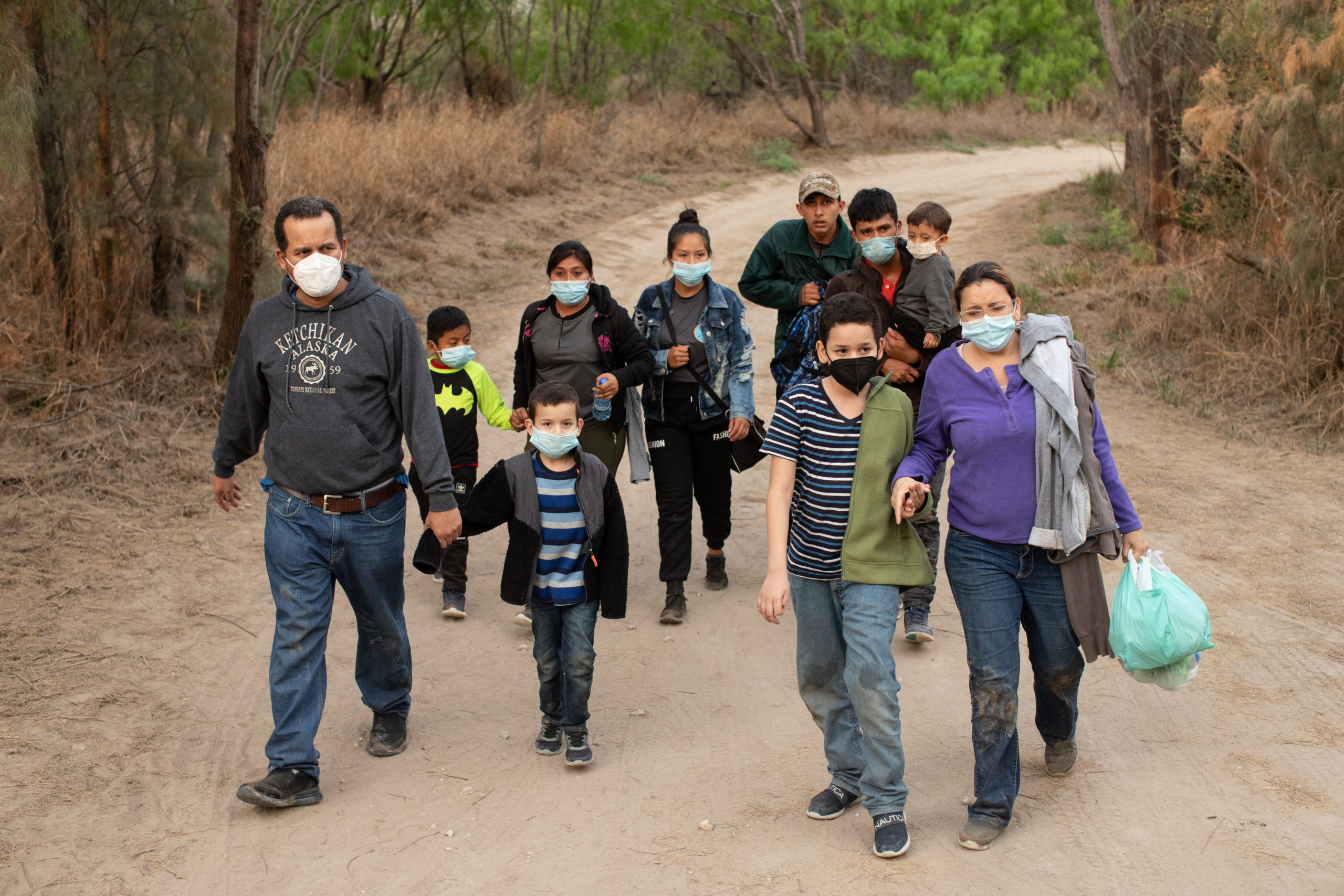 Some migrants cross through private property in the Rio Grande Valley to turn themselves into law enforcement officials after illegally entering the U.S. from the Rio Grande River, the DCNF reported on March 30. Republican Texas Gov. Greg Abbott directed law enforcement officials to prosecute migrants for trespassing on private property in June, according to the DCNF.

“Landowners along the border are seeing their property damaged and vandalized on a daily basis while the Biden Administration does nothing to protect them,” Abbott said in a statement. “Texas continues to step up to confront the border crisis in the federal government’s absence, but more must be done.”

The second highest region for encounters is the Del Rio sector in Texas, where thousands of migrants, mostly from Haiti, overwhelmed border officials, the DCNF reported on Sept. 17. The migrants set up a temporary encampment under the international bridge in hopes of being able to request asylum in the U.S.

There was a new section of border wall constructed between Del Rio, Texas, and Ciudad Acuña, Mexico, where the migrants were illegally entering the U.S. from the Rio Grande River, according to CBP.

With over 1,000 apprehensions across sector yesterday, agents are hard at work in the field this morning tracking and apprehending more migrants attempting to avoid law enforcement. pic.twitter.com/PMm7YZKNas

“I want to make sure we don’t overemphasize the wall as the solution, it’s not,” Morgan told the DCNF. “The wall is an integral part of a multilayer strategy of infrastructure, technology, and personnel. So you need all three of those elements in strategic locations and when you have that, then you see an incredibly high level of success across the board.”

Border wall systems built between January 2017 and January 2021 are considered new and designated as red lines on a map of the border wall provided by CBP, while the blue lines represent “existing barrier” structures that were constructed prior to January 2017, a CBP spokesperson told the DCNF. 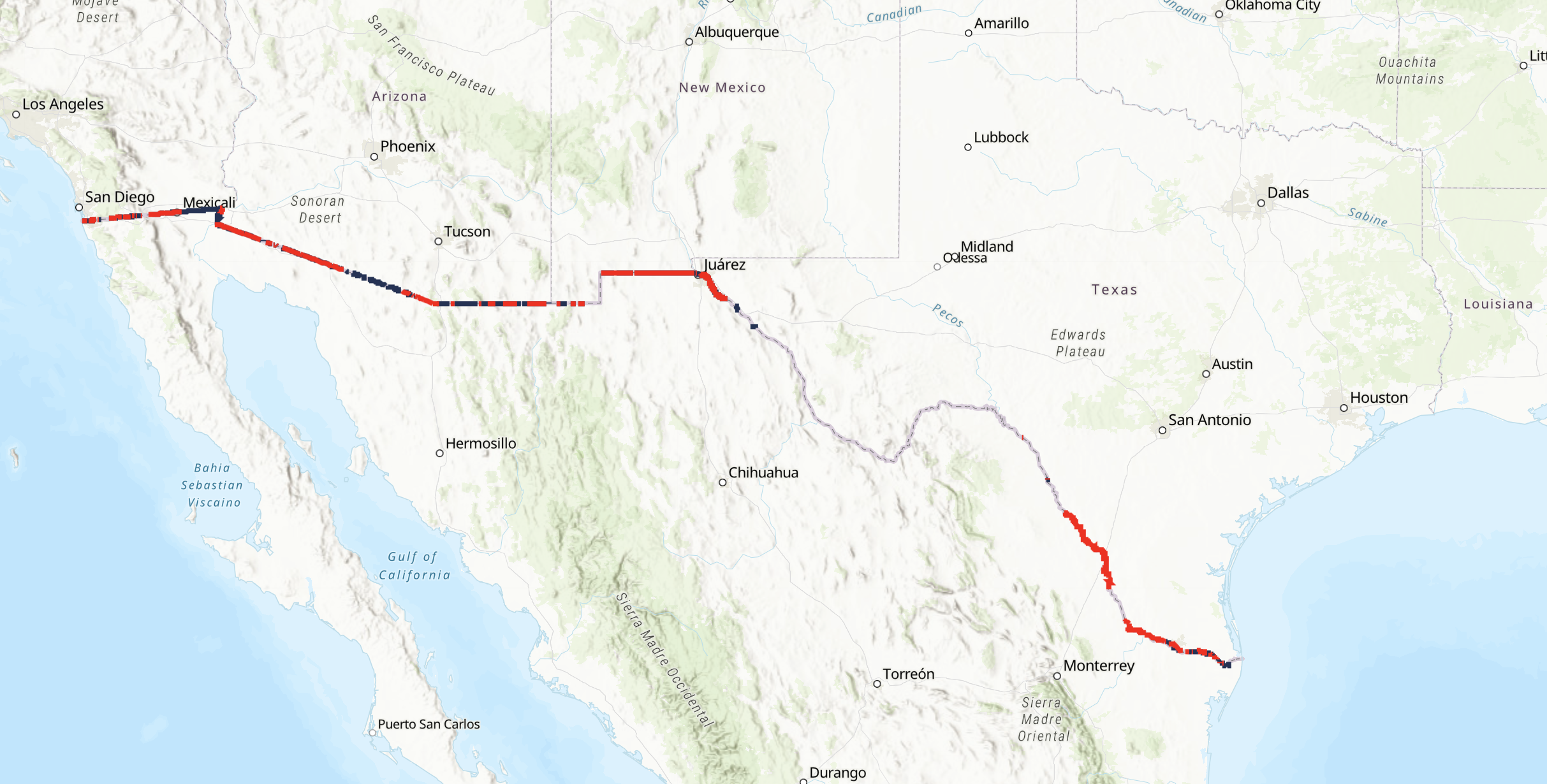 Cartel organizations largely decide where migrants will try to illegally enter the U.S. based on conditions like infrastructure and the number of law enforcement officials present in the U.S. side and which cartels and gangs control different areas in Mexico, according to Morgan. When more infrastructure is installed around certain parts of the border, cartels will just move to another spot.

“There’s nothing that comes across that border that the cartels don’t know about, approve, or don’t profit from,” Morgan told the DCNF.

The third-highest number of encounters fluctuates between the El Paso and Tucson sectors where there is a significant amount of border wall and natural barriers, including the Guadalupe Mountain range, according to CBP data.

CBP warned migrants attempting to enter the U.S. illegally around the Tucson sector that with temperatures regularly over 100 degrees they would need to consume at least two gallons of water a day or risk severe dehydration, heat-related illness or death on June 10. Officials encouraged migrants to call 911 if they are experiencing heat-related illnesses or become lost in the terrain.

“The smugglers will take the migrants in areas that you would think are impenetrable and they’re not,” Morgan told the DCNF. “They’ll travel 30, 40, miles over the most adverse terrain that you can think of to illegally enter the United States.”

Border Patrol agents rescued 26 distressed migrants from the Tabletop Mountains in southern Arizona on June 2, according to CBP. Four of the migrants were severely dehydrated and flown to a hospital for treatment while several others in the group were treated for heat-related illnesses.

The remains of more than 200 people, each suspected of being migrants attempting to enter the U.S. illegally, were found between October 2020 and June, the DCNF reported. Most remains were found in the Del Rio and Rio Grande Valley sectors of Texas.

“Although CBP does everything it can to locate and rescue individuals who are lost or distressed, the bottom line is this: there are thousands of square miles of mostly desert wilderness that extend immediately north of the border in our area of responsibility,” a CBP spokesperson told the DCNF. “People who made the decision to make the dangerous journey into this territory have died of dehydration, starvation, and heat stroke despite CBP’s best efforts to locate them.”

A national spokesperson for CBP declined to comment on where border officials are encountering the most migrants.

Content created by The Daily Caller News Foundation is available without charge to any eligible news publisher that can provide a large audience. For licensing opportunities of our original content, please contact [email protected]