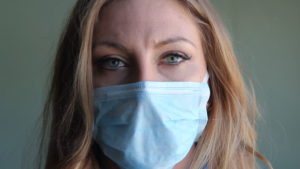 Filed by the free-market think tank the Freedom Foundation in Lewis County Superior Court, the lawsuit claims Inslee and Secretary of Health John John Wiesman do not wield the constitutional authority to mandate people to wear masks in public and on private property.

The foundation is seeking an injunction blocking the state from enforcing the governor’s face mask order, which requires everyone in the state to wear face masks.

It was been amended to further require businesses to have their employees wear face masks while working and to refuse service to any customers not wearing face masks.

“If people choose to wear a mask, that’s their choice,” Aaron Withe, national director of the Freedom Foundation, said in a statement. “But Inslee is going after otherwise law-abiding citizens when there are rioters destroying Washington cities such as Seattle with no punishment in sight.”

By ordering citizens to wear face masks, according to the lawsuit, the state is supposedly compelling people to violate their “freedom of conscience,” contrary to the state constitution.

“The Secretary of Health does not have sweeping power to pass rules and regulations imposing criminal penalties for refusing to kneel in submission,” Freedom Foundation counsel Shella Sadovnik said. “And the governor cannot assume powers the constitution assigns to the Legislature or the judiciary.”

The Washington Department of Health confirmed 37,420 COVID-19 cases in the state on July 6 with 1,384 having died.

A hearing for the lawsuit has not been scheduled.